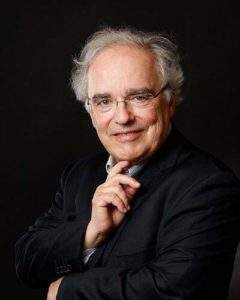 From New York’s Carnegie Hall to Sydney’s Opera House, via Amsterdam’s Concertgebouw, Salle Pleyel in Paris, Festival Hall in London, Suntory Hall in Tokyo and Berlin’s Philharmonic Hall, Ronald ZOLLMAN’s name has become through the years a familiar one for many international music lovers.

Music Director of the Pilsen Philharmonic Orchestra (Czech Republic) after having been their Principal Guest Conductor during the last 4 years, Ronald ZOLLMAN was born in Antwerp (Belgium). There he began his musical training at the age of four,becoming later the pupil of Igor Markevitch and Nadia Boulanger in France, and also of Hans Swarowsky in Austria and Franco Ferrara in Siena.

Ronald ZOLLMAN not only dedicates himself to the great symphonic works of the traditional repertoire, being very active in the field of opera as well as particularly noted for his commitment to contemporary music. In the theatre, he conducted a large number of performances at the Brussels La Monnaie Opera House (a.o. Don Giovanni, Cosi fan Tutte, La Bohème, Albert Herring and A Rake’s Progress), and the performances of La Traviata which he led at London’s English National Opera were soon followed by a series The Turn of the Screw with Scottish Opera. For the BBC he recorded Henze’s Der Prinz von Homburg, while his Don Giovanni for the Banff Summer Festival was considered as the highlight of this major event in Canada. In the USA, he is known for his performances of French romantic operas at Indiana Opera, such as Manon, Cendrillon, Werther or Roméo et Juliette.

As far as contemporary music is concerned, Ronald ZOLLMAN has worked regularly with the London Sinfonietta, and at Pierre Boulez’s request, he has been a frequent guest with the Ensemble InterContemporain, in Paris and on tour.

From 1989 till 1993, Ronald ZOLLMAN was Musical Director of the National Orchestra of Belgium, a position he then held during 9 years with the Philharmonic Orchestra of UNAM in Mexico City. In September 2002 he took the Music Directorship and Principal Conductorship of the Northern Israel Symphony, Haifa, and from 2009 until 2013, he was Director of Orchestral Studies at the Carnegie Mellon School of Music in Pittsburgh as well as the Music Director of their Philharmonic Orchestra. At the same time he was also Principal Guest Conductor of the Czech Radio Symphony Orchestra in Prague.

Ronald ZOLLMAN’s discography includes productions with many orchestras : following Mahler’s First Symphony with the Jeunesses Musicales World Orchestra, recorded live in Berlin, there were recordings with the National Orchestra of Catalunya, the Basler Sinfonie Orchester, the Zürcher Kammerorchester, the Northern Sinfonia, the Swedish Chamber Orchestra, with his own orchestra in Mexico City and with the Czech Philharmonic Orchestra. Also active in the world of film music, Ronald ZOLLMAN recorded the soundtrack for “Le Maître de Musique” (“The Master of Music”), the award-winning motion picture featuring José Van Dam, a nominee for the Best Foreign Picture at the Academy Awards in Hollywood. The musical quality of this particular soundtrack was recognized with the award of a Golden Record.

Ronald ZOLLMAN made his debut with the Orchestre de Paris at the occasion of their tribute concert to the memory of Mstislav Rostropovitch in Salle Pleyel (Paris) in 2007, conducting Henri Dutilleux’s Cello concerto in a performance considered by the composer himself as one of the best he had heard. In the summer of 2008 he shared the musical direction of the Orchestra Academica of the Campos do Jordao Festival (Brazil) with Kurt Masur. Beside his activities in the Czech Republic, plans for the future include concerts a.o. in Belgium, Germany, Mexico, Hungary, Serbia, Switzerland and China.

The Musician’s Instrument Fund is managed by

© L'instrument du musicien - made with fun by agraph.be